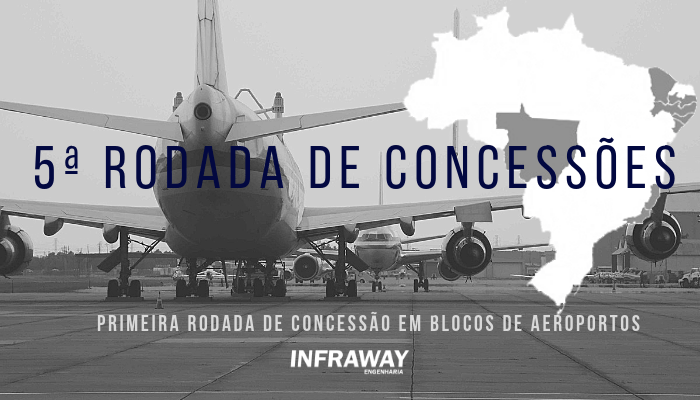 This will be the first round of federal airports concession in groups!

In September 2017, the Brazilian Government, by means of the Civil Aviation Secretariat (SAC) of the Ministry of Transport, Ports and Civil Aviation (MTPA), make a public call for studies Nº. 1/2017 to request the presentation of projects, surveys, investigations and technical studies to base the modelling of concessions for the expansion, operation and maintenance of 14 federal airports, which were divided into 4 groups:

*later excluded from the program

After being qualified by the Investment Partnership Program (PPI) Council, the airports except for Congonhas Airport that was removed from the list, became part of the National Privatization Program (PND) from October 2017 by means of Decree 9.180 published in the Official Gazette by the Federal Government.

Attending to the public call, the companies BACCO, CPEA, INFRAWAY, Moysés & Pires, PROFICENTER and TERRAFIRMA, specialized in the multiple areas of the technical requirements of the tender, consolidated an independent study group called the Airport Consultants Group (GCA) and requested authorization to provide to the Secretariat of Civil Aviation (SAC) technical studies compatible with the objectives of the requirement.

During the study stage, INFRAWAY was responsible for the development of the engineering and related studies, in partnership with other companies of complementary areas, having developed inventories of existing conditions and development plans with the definition of future requirements for all airport facilities for a 30-year concession period, including runway and taxiway systems, aprons, access systems, passenger terminal, among others.

Based on the technical, economic and environmental feasibility studies, it was verified that the initial composition of five airports in the Central-West Group would not be viable. Thus, the Airport of Barra do Garças was removed from the group, resulting in only four airports on the Center-West Group.

The remaining 12 airports correspond to 9.5% of the domestic market, with almost 20 million passengers / year. This will be the first round of federal airports concession in groups.

Based on the studies selected by the Civil Aviation Secretariat, the National Civil Aviation Agency (ANAC) prepared the draft version of the tender documents.

The Union Audit Office (TCU) analyzed studies and other documents of the process during the last months and on October 24, 2018 granted the approval to the process for the fifth round of airport concessions. During the session, the innovations proposed for this round were highlighted by the Ministers of the Court, who emphasized the quality and maturity of the feasibility studies, also the regulatory model adopted.

In sequence, the Resolution of the Council of the Program of Investment Partnership that approves the concession of the 12 airports was published in the Official Gazette of the Union on November 5, the bidding process will be a simultaneous auction for the three groups.

After approval by the TCU and the PPI, the process passed to ANAC. The draft and other documents of the process entered the agenda of the 23rd deliberative meeting of the Board of the Agency and on Tuesday (November 27th) were approved to be published. On Thursday morning, November 29, the ANAC President Director José Ricardo Botelho signed the approval for the publication of the draft, which is scheduled for November 30, draft must be submitted within 100 days from the publication of the draft (12 March 2019)

The public session regarding the concession of the 12 airports of the 5th round took place on Friday, March 15, 2019, at 10 am, at B3, in São Paulo. The auction of the Northeastern, Southeastern and Midwest Blocks took place simultaneously, and it is possible for a single bidder to compete for all the blocks of airports bidding.

The winners of the Blocks should follow actions to improve operational standards, the first investments – the so-called immediate actions, foreseen for the initial 180 days of the contract – ensuring the improvement of basic infrastructure, following investments in infrastructure adequacy and service level recompositing (Phase 1B) should meet parameters, based on recommendations of the International Air Transport Association (IATA). After the public session was held, the winners of each block were announced, they are:

The accumulated winning bids resulted in R$ 2.377 billion, which should be allocated to the National Civil Aviation Fund (FNAC).

All the material of the process, as and well as the studies the draft version of the tender documents are available on the website of the Ministry of Transport:

and on ANAC’s thematic page:

The agenda of the plenary session of the Union Audit Office (TCU) is available on the website:

Record of the plenary session of the Union Audit Office (TCU):

The Board Resolution of the Investment Partnerships Program is available at:

Access to the publication of the announcement in the Official Gazette of the Union, November 30:

More information and the progress of the program can be accessed on the Investment Partnership Program (PPI) website:

Record of the public session on the concession of the Northeast, Southeast and Midwest Blocks is available on the website: 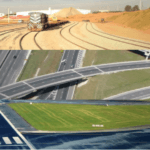 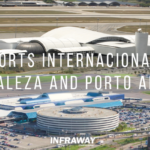